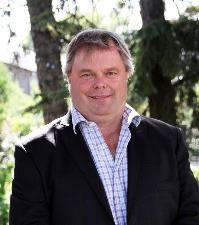 Chris Ross was born and raised northwest of Lacombe in the Lincoln District. The Ross family farm was homesteaded in 1919, where his parents Ian and Norma Ross still operate a cow/calf operation.

Chris’ rural farm community upbringing has contributed to the person he is today. He graduated from  Lacombe Composite High School in 1987 and later completed an Emergency Medical Services (EMS) program to work casual/part-time with Peace Hills EMS Wetaskiwin from 2006 to 2011. He currently works at Cervus Equipment Red Deer as a sales representative.

Chris married his wonderful wife Diane in 2004 and together they ran a 150 cow/calf operation west of his parents’ farm until the fall of 2008. They moved to Lacombe in December 2009. Chris enjoys camping, quadding and most importantly, family-time memories.

Since moving to Lacombe, Chris has been heavily involved in the community. He has chaired Lacombe Days since 2013, Lacombe Rotary Daybreak since 2015, and served as vice-chair for the Lacombe Recreation and Culture Board from January 2016 until October 2017.

Councillor Ross was elected in October 2017. He serves on the following municipal boards and committees:

My passions moving forward on Council is to continue to be true to who I am; be fair, honest, treat everyone equally with respect; build relationships to show we’re open for business, which will result in a more resilient and prosperous community for all.